It is common for industries to develop and implement testing standards.  While their use by manufacturers of products in an industry is usually not mandatory unless required by regulatory bodies of the government, such standards provide many important benefits.  These benefits include evaluating the suitability of new products, defining performance envelopes, comparing different products to determine which product to use, guiding research and development (R&D) activities towards the attainment of specific and well-quantified targets, and building credibility by demonstrating that a product will work as advertised.

This post summarizes the use of industry standards for the proppants used during hydraulic fracturing operations in the oil and natural gas exploration and production industry.  In such operations, (1) a fluid is injected into a wellbore in a subterranean formation at sufficiently high rates and pressures to cause the formation to fail, (2) the resulting fracture is kept open (propped up) by the placement of a packing of load-bearing “proppant” particles which have been carried by the fluid into the fracture, and (3) hydrocarbons (liquids and/or gases) flow towards the wellbore through the packing of proppant particles and are extracted.

The most important property of a proppant pack is rate at which hydrocarbons can be extracted through it.  This property is quantified in terms of a parameter named “conductivity” which, in this context, does not refer to electrical conductivity bur instead to the liquid conductivity of the packing.  In addition to depending on the factors summarized in the preceding paragraph, the conductivity of a proppant pack depends on the mechanical properties of the subterranean formation, the compression resistance of the proppant particles at the temperature of the area where the fracture is located, and the density of the surface coverage (expressed in mass/area, such as lb/ft2 or g/cm2) by proppant particles.

Testing standards that are very similar or identical to each other have been issued by the American Petroleum Institute (API) and the International Organization for Standardization (ISO) for proppants.  The following are the relevant API standards:

The image below, which summarizes some data for CARBOLITE low-density ceramic proppant manufactured by CARBO Ceramics, shows an example of how such data are often presented in product literature. 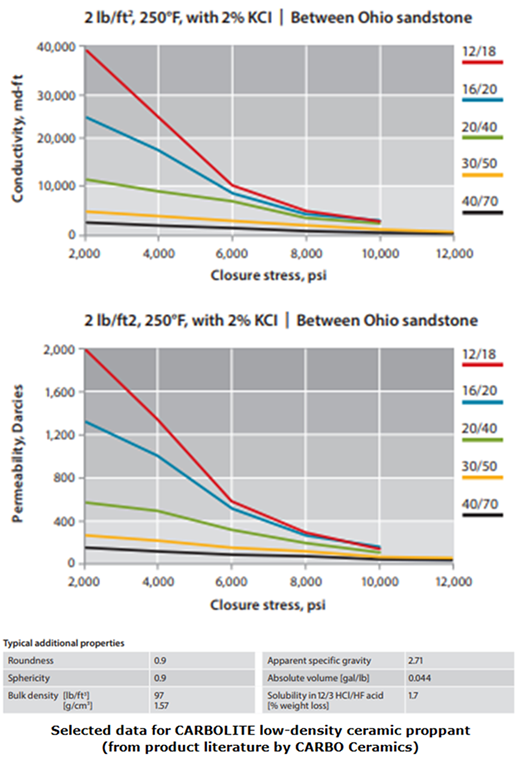 The following image, from the product literature of Covia which manufactures many sand proppant products, shows how such data can be used to define performance envelopes and to compare different products to determine which product to use in different subterranean environments. 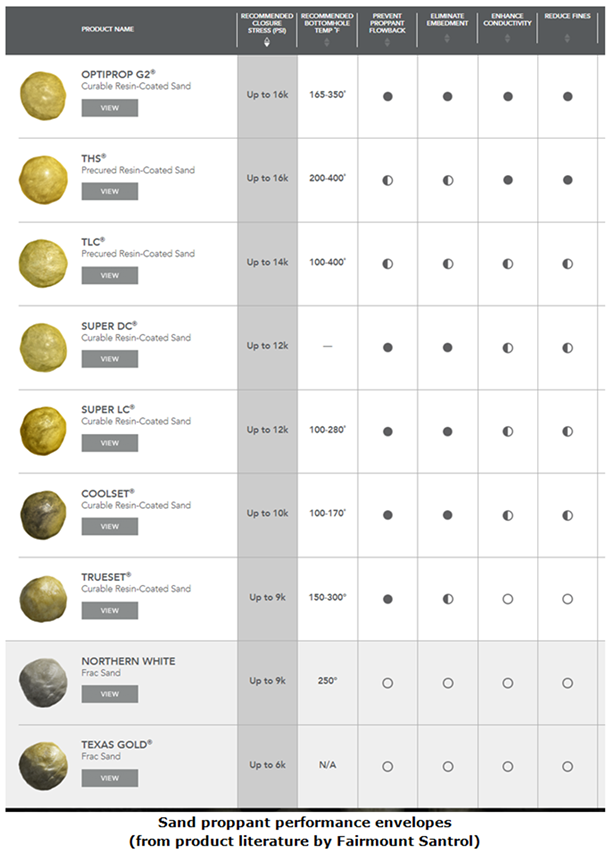 The development and commercialization of ultralightweight (ULW) thermoset polymer nanocomposite proppants with high load-bearing ability by Sun Specialty Products during the last 15 years is the most significant recent breakthrough in proppant technology.  Such ULW proppants are nearly neutrally buoyant in water, so that they can be transported with much greater ease than sand and ceramic proppants deep into a fracture.  Data and photos reproduced from the product literature for the two current commercial product grades (OmniProp® and FracBlack HT®) are shown in the image below. 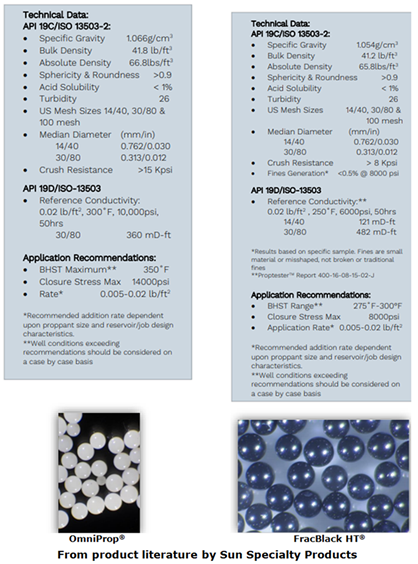