A PLANT-BASED RENEWABLE ALTERNATIVE TO PET

The development of biobased versions of or biobased alternatives to major polymers, providing comparable performance, is a major area of research and development in the quest to improve the sustainability of the polymer industry.  A biobased version of a polymer has the same repeat unit structure as the original polymer, but it uses biobased (and hence renewable) monomers rather than fossil fuel based monomers as its materials of construction.  A biobased alternative to a polymer uses biobased monomers as its materials of construction and also has a different repeat unit structure than the original polymer.

Poly(ethylene terephthalate) (PET) is an extremely versatile thermoplastic polyester.  Its vast range of applications includes PET bottles for beverages and polyester fibers used in textiles.  It is generally prepared via the reaction of fossil fuel based ingredients; namely, by reacting terephthalic acid (PTA) or dimethyl terephthalate (DMT) with ethylene glycol (EG).  While it is also possible to prepare partially biobased PET by reacting biobased EG with PTA or DMT, the biobased percentage in such partially biobased PET is quite small. See Sousa et al. for a review of work towards the replacement of PET in packaging, fiber, and film materials with biobased counterparts.

Poly(ethylene furanoate) (PEF) is a recently developed 100% biobased alternative to PET.  Plant-based carbohydrates are processed to derive the 2,5-furandicarboxylic acid (FDCA) monomer which is then reacted with biobased ethylene glycol to obtain PEF.  The images shown below are reproduced from or adapted from the product information provided by Avantium which developed PEF. 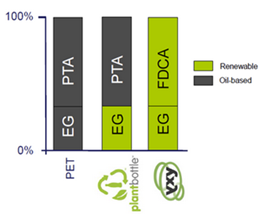 The properties of PET are comparable with and often even better than those of PET.  Hence PEF holds the promise of becoming a renewable replacement polymer for PET.

The development of PEF bottles as alternatives to the ubiquitous PET bottles, for example, is a major focus area of work on commercialization for PEF.  PEF offers several key performance advantages over PET in such applications; such as 10x oxygen barrier, 4x carbon dioxide barrier, 2x water barrier, and higher heat resistance (since glass transition temperature Tg≈86 °C for PEF while Tg≈74 °C for PET).  In addition to these performance advantages, PEF also holds the advantage of melt processability at lower temperatures than PET (since melting temperature Tm≈235 °C for PEF while Tm≈265 °C for PET).

The same performance advantages of PEF also mean that PEF films may be able to displace PET films in many flexible packaging materials applications.  For example, PEF film can be used to create thermoformed trays and cups for food and beverages, integrated into multilayer structures to create more flexible packaging for food and snacks, or be applied as a barrier layer to upgrade current barrier technologies.

PEF fibers also hold the promise of replacing PET fibers in many of the applications, ranging from sports apparel to carpets, where PET fibers are currently preferred for use.

After many years of work, FDCA-based polymers such as PEF have not yet become commercially significant despite all the potential benefits of replacing PET with PEF.  Backcasting, a planning method that starts with defining a desirable future and then works backwards to identify policies and programs that will connect that specified future to the present, has been used to identify a path towards commercial success.  Haas et al. have published the results of a literature review and backcasting workshop showing that unlocking the full potential of FDCA is restricted by several barriers which are strongly related to technological and market aspects of FDCA production and require an interdisciplinary approach to overcome.