SHEAR VISCOSITY OF DISPERSIONS OF PARTICLES IN FLUIDS

The difficulty of processing filled materials is often a limiting factor in advanced materials development because of the large increase that often occurs in the shear viscosity (η) of the starting fluid when fillers are added into it.

It is widely appreciated that η tends to rise rapidly with increasing filler aspect ratio (Af) and volume fraction (Φ).  Moreover, the increase in η for fluids containing highly anisotropic filler particles is sometimes much larger than the increase in stiffness and strength for the same filler particles dispersed at the same η in a solid polymer matrix, making it difficult to incorporate as much nanofiller as one would wish to incorporate.

Manufacturing processes for nanocomposites are among the types of processes where such limitations are often encountered.  Difficulties can arise whether the starting fluid is a mixture of monomers that will polymerize in situ around the nanofiller or a polymer melt into which the nanofiller will be blended.

This persistent issue has led to much work; and to many scientific publications, including J. Bicerano, J. F. Douglas and D. A. Brune, "Model for the Viscosity of Particle Dispersions", J. Macromol. Sci. - Reviews, C39, 561-642, 1999.  While this article was published nearly two decades ago and much additional relevant work has been published since then, it remains a valuable reference both because of the extensive literature review it provides and because it describes a predictive model that can be used to obtain both fundamental understanding of the relevant physics and rough but reasonable predictions.

A predictive model of the viscosity of filled polymers is evidently a significant challenge for theory as well as for engineering practice.  Such a model, with broad potential applicability to dispersions of fillers of different shapes dispersed in different types of fluids, was developed and described in the article cited above.  Particular emphasis was given to dispersions of platelet-shaped particles, because of their wide availability in the form of clays and the commercial interest in dispersing such anisotropic particles in polymers.

The vast and multidisciplinary literature relevant to describing the viscosity of filled polymers, which includes publications in mathematics (especially percolation theory and fractals), geology (especially structures and interlayer energies of clays), biology (especially the movement of microorganisms in various environments), and the more familiar types of resources in physics, chemistry, rheology, and polymer science, was also reviewed.

It was shown that key information about the dispersion shear viscosity (ηdispersion) can be obtained using simple modeling and the concepts of universality and scaling.  A universal expression (with platelets, spheres, and fibers as the most important special cases) was obtained for ηdispersion relative to the η of the dispersing fluid.  This reduced viscosity (ηdispersion/ηfluid) was shown to be a function of the reduced volume fraction (Φ/Φ*), where Φ* is the “viscosity percolation threshold”.  The maximum packing volume fraction Φm was then used as an approximation for Φ*, and estimated by scaling arguments relating Φm to the geometrical percolation threshold pc.  The model was also extended to treat the effects of shear, temperature, particle flexibility, and the possibility of particle aggregation into fractal-shaped clusters.  The results of these model calculations were illustrated with several examples, including comparisons with experimental data for clay-filled polymers. 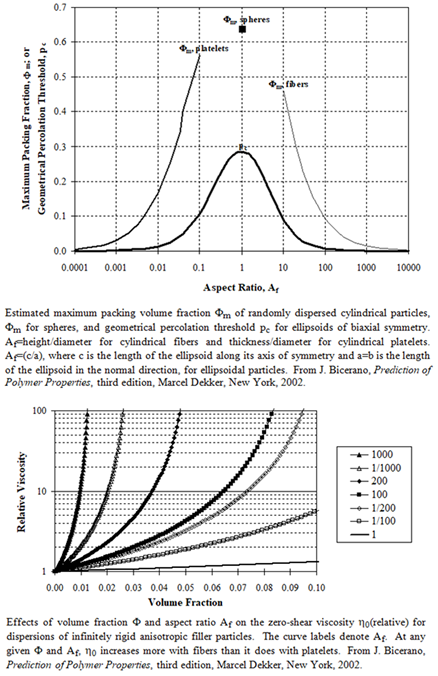