By definition (see Syduzzaman et al.), “smart textiles are … textiles that can sense and react to environmental conditions or stimuli, from mechanical, thermal, magnetic, chemical, electrical, or other sources.  They are able to sense and respond to external conditions (stimuli) in a predetermined way.”

Smart textiles are most often developed by modifying the surface of a textile with a stimulus-responsive coating, film, or finish.  Such coatings, films, and finishes are normally placed on a textile surface by using a chemical process, a physical process, or a process that combines both chemical and physical components.  Examples include the modification of a textile surface by the placement of a coating, film, or finish comprising a near infrared energy absorbing agent, an ionomer, a hydrogel, optical fibers, a shape memory material, a phase change material, or even sometimes a combination or a mixture of such materials.

The development of biohybrid wearables by researchers at the Massachusetts Institute of Technology (MIT) is one of the most exciting recent breakthroughs in smart textile technology.  This approach differs in a fundamental way from the conventional approaches summarized in the preceding paragraph since it involves the placement of biofilms rather than the use of chemical and/or physical processes to modify textile surfaces.

Two open access articles, bioLogic:  Natto Cells as Nanoactuators for Shape Changing Interfaces (Yao et al., 2015) and Harnessing the Hygroscopic and Biofluorescent Behaviors of Genetically Tractable Microbial Cells to Design Biohybrid Wearables (Wang et al., 2017), describe the deposition and use of harmless bacterial biofilms for various purposes including the improved management of moisture and heat in sportswear.  The bacterial cells in such biofilms function as humidity-sensitive nanoactuators.  For example, in the sportswear prototypes (a running suit and a shoe) that were prepared by using this approach, the hygroscopic and biofluorescent behaviors of such living cells were engineered to design biohybrid wearables which give multifunctional responsiveness to sweat.  By depositing genetically tractable bacteria on a humidity-inert substrate to form a heterogeneous multilayered structure, biohybrid films that can reversibly change shape and biofluorescence intensity within a few seconds in response to environmental humidity gradients were obtained.  These biofilms were placed on the running suit and the shoe in the form of bio-flaps that dynamically modulate ventilation in synergy with the body’s need for cooling.

Figures 2 and 12 from bioLogic:  Natto Cells as Nanoactuators for Shape Changing Interfaces (Yao et al., 2015), reproduced below, summarize key aspects of the technology.  Figure 2 illustrates the use of a liquid cell deposition method to obtain composite biofilms consisting of a cell layer and a substrate layer by applying cell-water solution onto the substrate layer and vaporizing the water content, and the fact that variations of the bending curvature of the biofilm are triggered by changes in relative humidity.  Figure 12 shows that a sufficiently thin composite biofilm reacts to the body temperature by opening up when the skin temperature increases during running and sweating, so that this responsive “Second Skin” creates an ecosystem between the human body and the covering.

Figure 3 from Harnessing the Hygroscopic and Biofluorescent Behaviors of Genetically Tractable Microbial Cells to Design Biohybrid Wearables (Wang et al., 2017), reproduced below, summarizes the design and performance of two sweat-responsive biohybrid wearable prototypes (a running suit and a shoe) based on this approach. 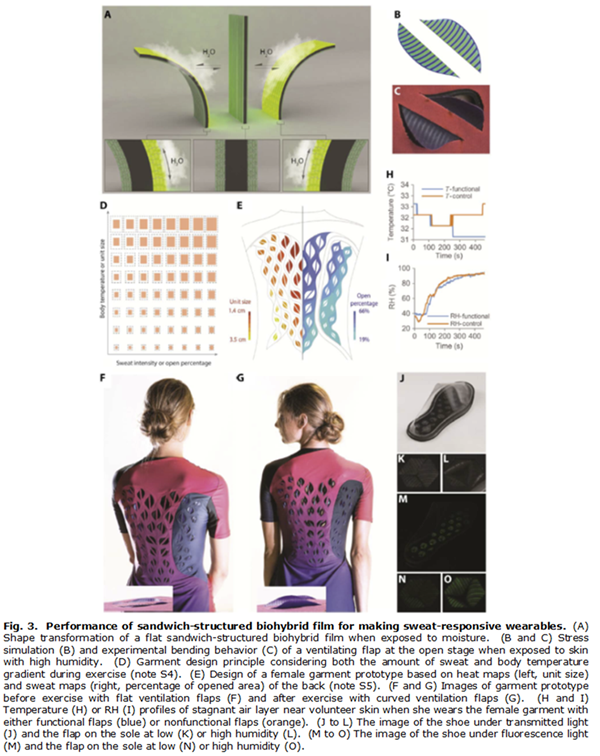