By definition (see Vasapollo et al.), “Molecular Imprinting Technology (MIT) is a technique to design artificial receptors with a predetermined selectivity and specificity for a given analyte, which can be used as ideal materials in various application fields.  Molecularly Imprinted Polymers (MIPs), the polymeric matrices obtained using the imprinting technology, are robust molecular recognition elements able to mimic natural recognition entities, such as antibodies and biological receptors, useful to separate and analyze complicated samples such as biological fluids and environmental samples.”  Readers interested in gaining a broad general understanding of MIPs are recommended to study this excellent open access review article.

The development of MIPs and their applications is at the frontiers of materials research and development (R&D).  This post provides a perspective on the great diversity of commercially available MIPs as well as services for the custom design of MIPs when suitable off-the-shelf products are unavailable.  Helping our clients make the best choices for their applications from among the vast number of such available products and services falls under the scope of our material selection, design, and development services.

Many companies manufacture and sell MIPs.  The products offered by five of these commercial suppliers will be discussed below.  Each image in this post is reproduced from the website of the manufacturer named in the heading of the section where it is included.

It will become obvious from the discussions of the offerings of different manufacturers that most of them offer not merely product lines of MIPs but also services to design and produce custom-made MIPs for their customers.  In fact, as of the date this post was created, some of them don’t offer any off-the-shelf products, and they are only working with their customers on a collaborative basis to develop MIPs that will solve customer needs.  This situation is not surprising.  There are countless different separation and extraction needs.  Hence it is not unusual for a customer to need a custom-made product for the separation or extraction of a molecule for which no MIPs have been developed yet by any manufacturer.

AFFINISEP offers a broad range of MIPs based on its technology, as summarized below.

MIPs present an interesting alternative to IAC (immune assay chromatography). They do not suffer from storage limitations and stability problems regarding organic solvents.  They are also characterized by a higher capacity than IAC, i.e. a higher amount of a target analyte being retained on the MIP when comparing similar amount of sorbent packed in a solid phase extraction (SPE) cartridge.  Thanks to these interesting properties, AFFINISEP has developed AFFINIMIP® SPE, a range of SPE phases used for sample cleanup applications in food and feed safety analysis, environment analysis, life sciences, and pharmaceutical R&D.  Sample preparation methods are available for a broad range of target molecules; including mycotoxins (such as Patulin, Zearelonone, Ochratoxin A, and Fumonisins), drugs (such as amphetamines), and endocrine disrupting compounds (such as Bisphenol A and estrogens) on food matrices (such as cereals, milk, coffee, wine, etc.).

The four-step (conditioning, loading, washing, and elution) SPE process followed when using an AFFINIMIP® SPE product is demonstrated in a 4.5-minute video.

The products of AFFINISEP are available in different formats, as shown below. 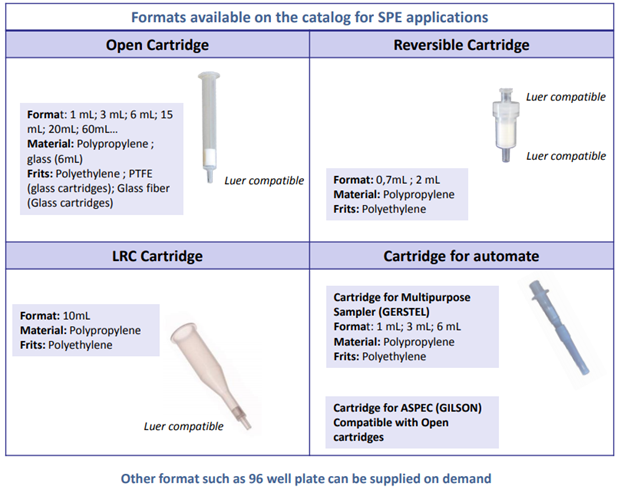 AFFINISEP also develops custom-made MIPs as a service to its customers by following the procedure summarized below. 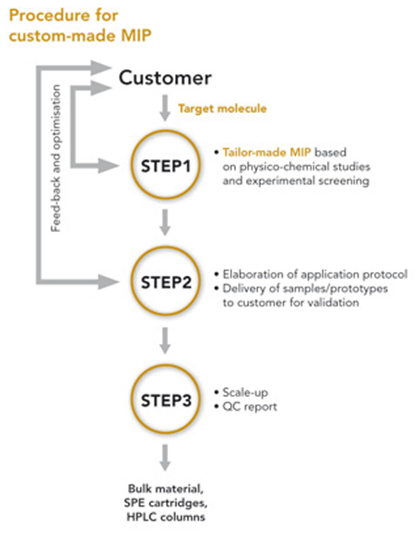 Biotage and its subsidiary MIP Technologies design and produce MIPs for many different applications.   Their designed MIPs with unique selectivity in separation/extraction processes such as SPE are ideal for the removal of low-level contaminants, and for the extraction of high-value desirables from any process.  In particular, their AFFINILUTE™ MIP columns offer analytical chemists ultimate selectivity compared with standard SPE techniques.

Selectivity towards one specific molecule or towards an entire class of related molecules can be designed into the MIP phase.  It is possible to extract unwanted chemical compounds from complex mixtures, resulting in a significantly increased productivity (as shown below) by decreasing the number of purification cycles, leading to a more cost-efficient process. 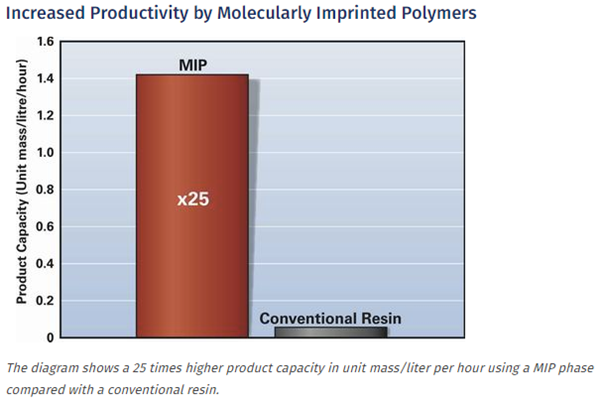 MIPs are engineered for a large variety of molecules; including small molecules, chiral compounds, proteins (via epitope imprinting), peptides, and carbohydrates. They are designed both for analytical-scale and for process-scale applications.

Application areas include pharmaceuticals, food and beverage, forensics, doping control, healthcare, veterinary care, chemicals, consumer products, and environmental cleanup.  The minimal impact of these MIPs on a product's flavor and fragrance makes them the first choice for the food, beverage, flavor, and fragrance industries.

With its proprietary new technology known as grafting, in which MIPs are directed to the surfaces of porous silica particles, Biotage can produce solid phase materials that have large surface areas (up to 1000 m2/g) and improved mass transfer properties.  This is particularly important whenever the separation of similar molecules (such as enantiomers) is required or fast kinetic resolution is desirable. 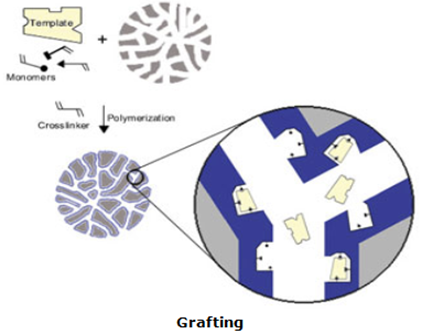 Biotage also holds patents on hierarchical imprinting where the template is immobilized onto a support material during polymerization and then the support is removed.  The resulting MIPs have binding sites that are highly accessible to molecules much larger than the imprinted template.  This is particularly relevant to epitope imprinting of proteins and similar applications.  As depicted below, a fragment of the target is sufficient to form a specific cavity into which the whole molecule (such as protein or peptide) can then bind. 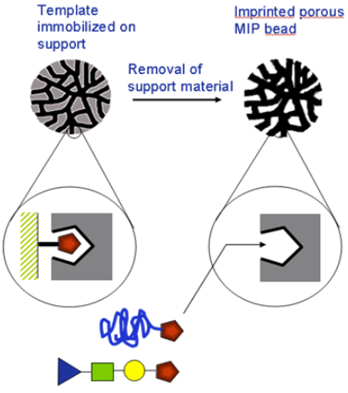 Sigma-Aldrich supplies the SupelMIP® product line of MIPs consisting of highly cross-linked polymers engineered to extract a single analyte of interest or a class of structurally related analytes with extremely high selectivity.  Selectivity is introduced during MIP synthesis in which a template molecule, designed to mimic the analyte, guides the formation of specific cavities or imprints that are sterically and chemically complementary to the analyte(s) of interest.  This leads to stronger interactions between the solid-phase and the analyte(s).  Consequently, harsher wash conditions can be tolerated during SPE methodology, resulting in cleaner extracts.  Because extraction selectivity is improved significantly, lower background is observed, allowing analysts to achieve lower limits of detection. 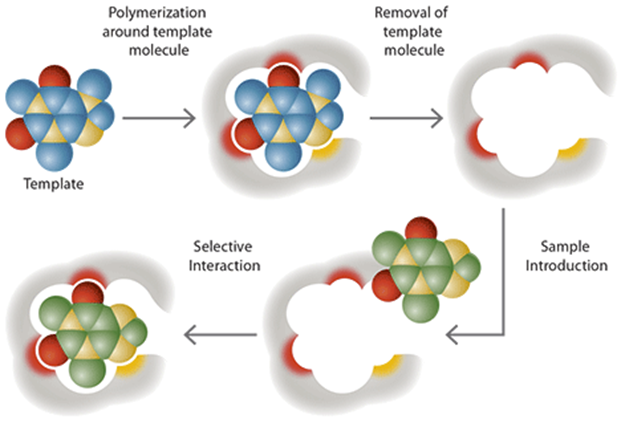 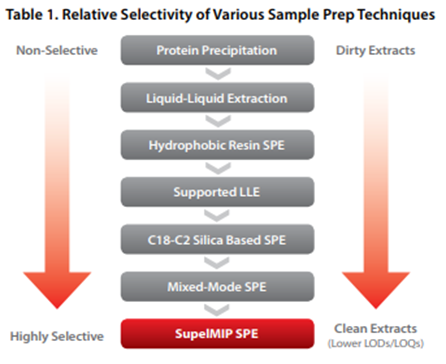 MIP Diagnostics develops nanoMIPs which are nanostructured polymer particles typically containing a single binding site for their target.  NanoMIPs can also be fused to solid substrates, such as sensor surfaces, if required.  NanoMIPs are versatile, robust (able to withstand harsh chemical environments such as extremes of pH, seawater, or high concentrations of organic solvents), and highly stable synthetic alternatives to antibodies.  They are also biocompatible and capable of being internalized in cells.  They can be functionalized easily, for example to make them fluorescent or magnetic.  Their robustness makes them ideal reagents for a wide range of applications including point-of-care diagnostics and in field-based testing.  In addition, nanoMIPs have a very long shelf life at room temperature so that they are ideal when the cold chain (defined as a temperature-controlled supply chain) cannot be guaranteed.

NanoMIPs have been created and deployed successfully against all major target classes; including peptides, proteins, and other macromolecular structures, as well as smaller chemical entities such as drugs, their metabolites, and commonly used biochemical species such as enzyme cofactors.

NanoMIPs have been used in separation and purification applications involving targets such as (S)-Citalopram, Amiodarone, Salbutamol, 4-ethyl phenol, (+)-(S)-desmethylcitalopram, and (+)-(S)-didesmethylcitalopram melamine.  They can also be used to enable the selective removal of subcellular targets such as bacteriophage or viruses from water to make drinking water safe for consumption.

NanoMIPs have been integrated with a range of transducers based on electrochemical, optical, gravimetric, and thermal detection methods.  NanoMIPs are advantageous for sensor development since they can be used for fabrication using existing techniques originally developed for natural receptors such as enzymes and antibodies.  Also, due to their stability, nanoMIPs can be dispersed in conductive inks and used directly for the manufacture of screen-printed electrodes.  NanoMIPs have been used to prepare sensors for targets such as cocaine, ethylphenol, histamine, phosphate, Vancomycin, trypsin, and bacteriophages.

The proprietary technology of MIP Diagnostics includes a novel method to produce nanoMIPs which circumvents the drawbacks of traditional MIP manufacturing methods. 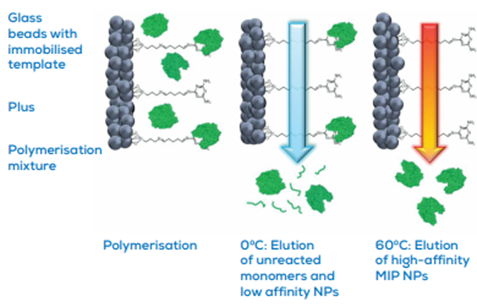 Using their proprietary nanoMIP design and development process, MIP Diagnostics can provide a proven custom-made nanoMIP, typically within 4-6 weeks of receiving the target.

MIP Diagnostics also offers its clients the ability to manufacture MIPs for themselves by using the automated MIP synthesizer of MIP Diagnostics.

Ligar Polymers is a development-stage company based in New Zealand.  It claims to have ushered in a revolution in molecular extraction through its technology.  It focuses on the extraction of high-value molecules from liquids (such as flavors, nutraceuticals, aromas, and medicinal compounds; from oils, juices, alcohols, liquidized plants, and water), the removal of contaminants (such as heavy metals, pesticides, organic toxins, and flavor taints) from liquids, and the development of extraction systems (using filter plates, bead columns, or powders) for processing large volumes of liquids.  The fact that their website does not list any off-the-shelf products suggests that they are probably still trying to establish their technology via collaborations with and funding from joint development partners.