Microbial polyesters were mentioned briefly in a post titled BIOBASED FEEDSTOCKS (created 17 November 2018).  The present post will cover one class of these materials, whose importance and range of applications are growing rapidly as the polymer industry continues to strive for increased sustainability, in greater detail.

Microbial polyesters can be subdivided into two major classes.

Polyhydroxyalkanoates (PHAs) constitute the most important family of completely microbial polyesters.  PHAs are produced commercially by microorganisms (such as the bacteria Cupriavidus necator, Azohydromonas lata, Ralstonia Eutropha, species from the Alcaligenes genus, and recombinant Escherichia coli) that accumulate them as energy storage materials when cultured by using suitable nutrients in suitable environmental conditions.  Suitable nutrients include beet and cane molasses, corn starch, alcohols, and vegetable oils.  Fermentation strategies are also under development to improve and scale up the production of PHAs by some other bacteria.

PHAs are biobased, renewable, environmentally friendly (since they reduce CO2 emissions), biocompatible, and biodegradable.  They possess properties and performance characteristics which make them suitable for a broad range of applications, including not only various medical and biomedical applications but also some applications for which polymers derived from fossil fuel based feedstocks were the only choices until recently.

The following are the most widely commercially available PHAs:

The molecular structures of P3HB, P3HB3HV, and P3HB3HH, and a transmission electron micrograph of a thin section of Azotobacter vinelandii bacteria containing P3HB granules (white inclusions), are shown below.  These images were reproduced from an open access review article by C. Peña et al., Biotechnological Strategies to Improve Production of Microbial Poly-(3-hydroxybutyrate): A Review of Recent Research Work, Microbial Biotechnology, 7(4): 278–293 (July 2014). 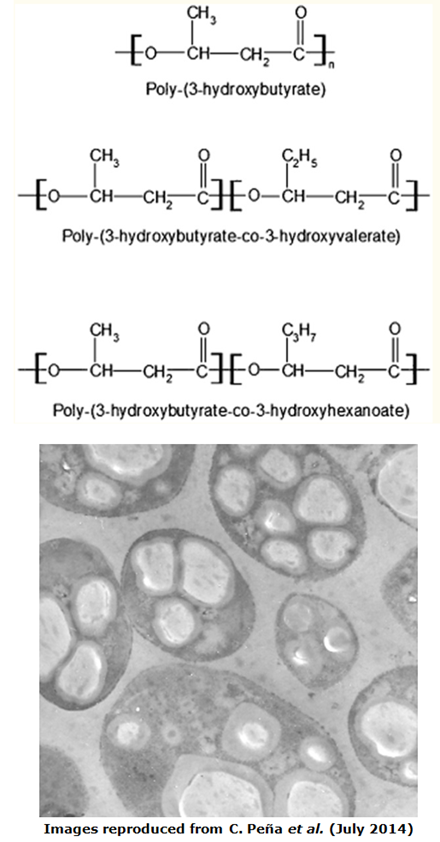 The P3HB homopolymer and the copolymers of 3-hydroxybutyrate with 3-hydroxyvalerate or 3-hydroxyhexanoate and/or some other (less commonly used) hydroxyalkanoate repeat units that will be identified below, represent a vast design space of semicrystalline aliphatic polyesters.  Within this design space, the crystalline fraction (xc), melting temperature (Tm), glass transition temperature (Tg), and other properties that affect both the processing attributes and the performance of fabricated articles during use, can be varied by varying the type and mole fraction of comonomer and the extent of polymerization as characterized by the number-average and weight-average molecular weight (Mn and Mw).

The P3HB homopolymer provides the highest xc, Tm, Tg, stiffness (Young’s modulus E), and tensile strength (σt), but manifests the lowest impact resistance (and hence the most brittleness and the lowest toughness).  In the P3HB3HV and P3HB3HH copolymers, the 3-hydroxyvalerate or 3-hydroxyhexanoate repeat units promote flexibility, so that xc, Tm, Tg, E, and σt all decrease, while the impact strength increases (and hence the brittleness decreases and the toughness increases), with increasing comonomer mole fraction.  Different balances of all these attributes are optimal for different applications.

The PHA design space thus obviously resembles the design space represented by the polyethylene homopolymer and the copolymers of ethylene with propylene, 1-butene, and other olefin (alkene) monomers.  The main difference from a molecular structure viewpoint is that the PHAs have stronger polar interactions than the polyolefins since the PHAs contain high concentrations of ester linkages while the polyolefins are hydrocarbon polymers.  The main difference from a sustainability viewpoint is that the PHAs are biobased while the polyolefins are based on monomers derived from fossil fuels.

P3HB, P3HB3HV, P3HB3HH, and/or other PHAs identified below, are commercially available from several manufacturers.  The products of six major manufacturers are discussed below.  Helping our clients select the best choices for their applications from among the vast number of such products falls under the scope of our material selection services.

Enmat® is produced by TianAn (China).

Biomer thermoplastic P3HB homopolyester pellets that can be processed on standard injection molding machines are produced by Biomer (Germany).  The melt behaves like a liquid crystalline polymer, allowing the molding of thin-walled or complex structures even on small injection molding machines.  The fabricated articles are waterproof, are heat-resistant, have appealing surfaces, and are fully biodegradable. 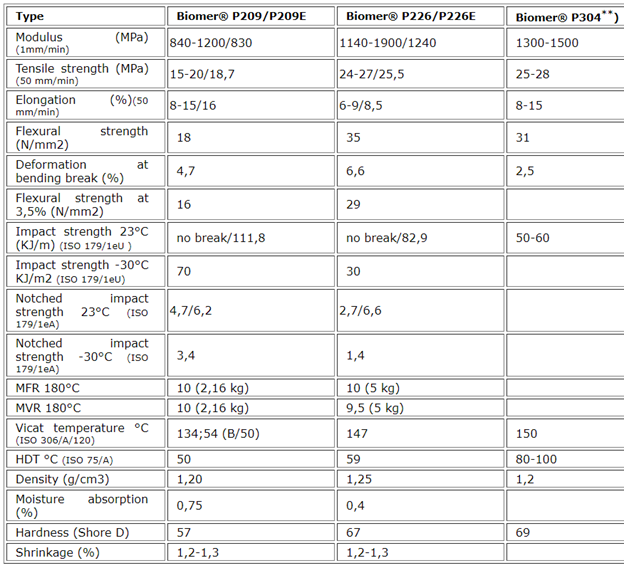 PHBH™ (P3HB3HH in the notation used in this post) copolymers are being produced by Kaneka (Japan) within the scope of its new business development activities.  The prospects for the establishment of PHA manufacturing technology utilizing biomasses not used for food as the primary ingredients are being explored.  Resin mixes and molding processes are being refined to further improve the strength and tear resistance of packaging films, and especially agricultural mulch films and composting bags.  Market opportunities in highly durable molded products, such as bottles, other containers, auto interiors, and electrical equipment are being pursued.  The product lifecycle and property data are shown below. 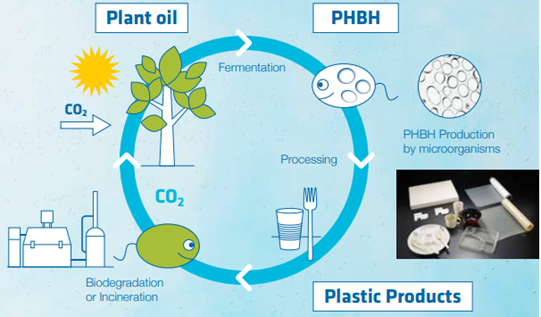 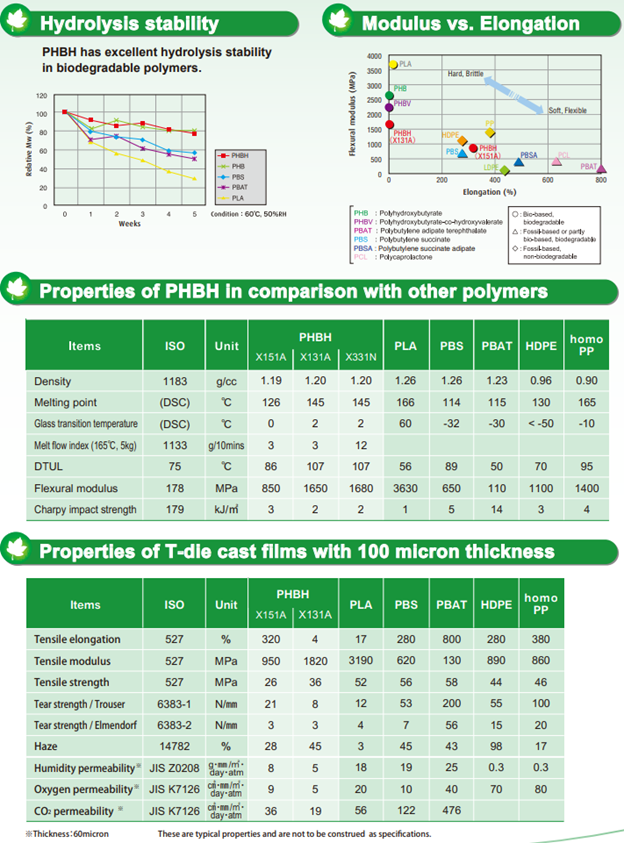