All posts published on this blog thus far have focused on technologies, materials, products, and services that are available here and now, and that we can therefore deploy to help our clients solve their problems immediately.  This post will be an exception since it will be forward-looking.  It will discuss an exciting new technology which is likely to take more than a decade to come to fruition; namely, quantum computing, which may revolutionize materials modeling and simulation by 2040 if it is scaled up successfully by 2035.

The multidisciplinary and integrated modeling approach often pursued in industrial modeling and simulation was introduced, and the multiscale modeling paradigm usually preferred for such work was summarized, in a post titled MULTISCALE MODELING AND SIMULATION IN INDUSTRY (created 17 November 2018).  Leading software suites with a comprehensive range of capabilities for performing modeling and simulations from the quantum mechanical scale to the mesoscale were summarized in a post titled SOFTWARE FOR MATERIALS MODELING AND SIMULATION (created 29 November 2018).  At the continuum (bulk material) scale, COMSOL Multiphysics® is a comprehensive software suite for simulations for every conceivable real-life application in all industries.  It is clear that the computer speed is a major limitation in materials modeling and simulation.  If new computers which are trillions of times faster than the fastest supercomputers of today were to become available in the future, they would revolutionize materials modeling and simulation.

It is not surprising that there is a race between the research and development (R&D) institutions of the USA, China, and other nations with the capabilities needed to pursue advanced science and technology, as well as the R&D branches of several major multinational technology corporations, to become the first to reduce the concept of quantum computing to practice in fully scaled-up quantum computers.

The achievement of quantum supremacy on a small scale by using Google’s Sycamore chip was reported recently in a paper describing the performance of a record-breaking simulation of a chemical reaction.  Ultra-cold superconducting chips were used in this technology.  The figure reproduced below from Rubin et al., Science 369, 1084–1089 (2020), shows some results from this paper.  VQE denotes Variational Quantum Eigensolver. 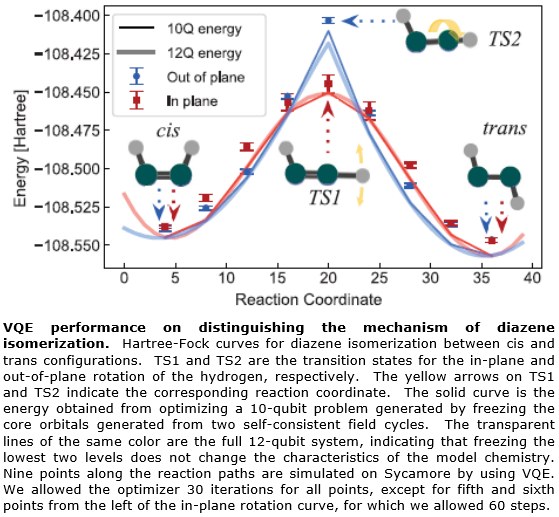 Another recent paper, published by a team of researchers in China, demonstrated the achievement of quantum supremacy on a small scale by a quantum computer built by this team which completed a calculation almost 100 trillion times quicker than existing supercomputers.  Photons (particles of light) were manipulated in this technology.  The figure reproduced below from H.-S. Zhong et al., Science 10.1126/science.abe8770 (2020), shows that the photonic quantum computer generates up to 76 output photon clicks, which yields an output state-space dimension of 1030 and a sampling rate that is ~1014 faster than using the state-of-the-art simulation strategy and a Sunway TaihuLight which was the world’s fastest supercomputer when it was first introduced in 2016. 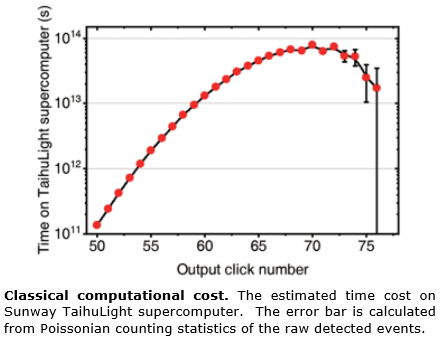 The development of scaled-up quantum computers that can solve important practical problems is still years (in our estimation, more than a decade) away.  Some experts remain skeptical about whether this will ever happen.  The validation of the concept of quantum computing by using two completely different approaches (superconducting chips, photon manipulation) is a hopeful sign that it will probably happen.  Approaches that work comparably well on a small scale sometimes differ greatly in their scalability, which is why the validation of the concept using two different approaches offers more promise than its validation twice by using the same approach would have.  Based on our understanding of the magnitude of the remaining challenges and the pace of technological progress, we anticipate the successful scaleup of quantum computing by 2035, and a resulting revolutionary advancement in materials modeling and simulation by 2040.